Why does Fortis want your signature?

Cobble Hill Association has received reports that representatives of Fortis Property Group are canvassing the neighborhood asking people to sign a petition in support of "affordable housing” and “more parks” for Cobble Hill. Undoubtedly, these signatures are being collected to help Fortis promote its proposed rezoning of the Long Island College Hospital site. This is in addition to Fortis’s efforts on Facebook to solicit support. We are asking that residents NOT sign the petition— either on line or in person. Here’s why:

CHA does not support the current Fortis proposals and there continues to be a number of important unresolved questions over how these towers will be built without causing irrevocable harm to the historic district of Cobble Hill— and to our larger brownstone community.

The petition only addresses what Fortis claims will be the amenities related to the rezoning development they want to build and does not allow participants to express doubts, concerns, or objections about the actual plans.

The petition may not specifically mention the rezoning, but we want to remind everyone that the rezoning would result in a development much larger than they can build As of Right, and that the proposed “public park” could be used as a schoolyard.

Our greatest concern is that residents are being asked to share personal information with a major real-estate developer who may then use the data collected to make spurious claims of neighborhood support for its high-rise towers complex.

Happy Halloween Cobble Hill! The costumes are getting their final touches and everyone's ready to trick-or-treat! The costume parade will congregate in Cobble Hill Park tomorrow, leaving at 4:00pm. We will proceed from Congress Street to Henry Street, head south on Warren Street, and turn back to Clinton Street to return to Cobble Hill Park. The residents of the Cobble Hill Health Center are looking forward to seeing our costumes when the parade passes by on Henry! The route will be led by Captain Colon, Commanding Officer of the 76th Precint, and the Packer High School Jazz Band. See you tomorrow! 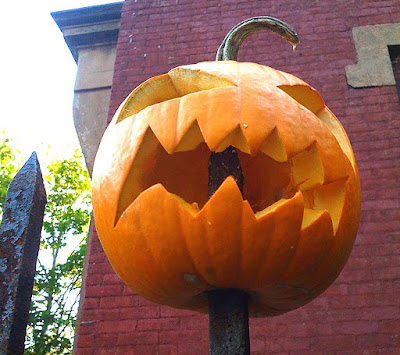 Yesterday, the CHA sent the following message in a letter to Fortis, NYU Langone, and SUNY about conditions at the former site of Long Island College Hospital.

We are writing on behalf of the Cobble Hill Association (the “CHA”) and the residents of Cobble Hill to bring to your attention certain matters relating to the former Long Island College Hospital (“LICH”) site in Cobble Hill and your current activities with respect to it.

First, the public areas of the LICH site are not being maintained in a safe and lawful manner. Lights are either broken or not turned on at night. Park gates, to these darkened areas, are often left unlocked at night. Other gates, including those leading to public areas, are improperly locked during the day. Sidewalk snow removal was untimely or nonexistent for much of last winter. We have received reports of bloody sheets and syringes in neighborhood garbage receptacles. Efforts by community members to locate the entity or person responsible for these matters and to get them corrected have proven time consuming and largely unsuccessful. These conditions present a clear and present risk of assault and injury to community residents.

In addition to the lack of maintenance, demolition and construction activities have caused greater hazards for the Cobble Hill community. Construction debris, moving vans, garbage trucks, parked cars and uneven pavement have rendered the public area of the Pacific Street corridor dangerous for its intended pedestrian and recreational use. This area, which long provided recreational space and a safe passageway between play areas under the auspices of the NYC Parks Department, has become almost completely unusable by the public. Elsewhere on the site, especially along Amity and Henry Streets, unsafe construction practices abound, some of which have already led to the issuance of a stop work order. Neighbors have reported unsafe asbestos removal, while the Stop Work Order was in effect, including workmen who were not wearing protective clothing. Behind the “No Parking” door on the Polhemus Building, there is floor-to-ceiling garbage. The gate to the west of the former doctors’ residence (94 Amity) has been seen unlocked and unguarded, compromising the safety of neighboring homes.

Second, the LICH parking garage at 352 Hicks Street has been unlawfully converted from an “accessory” parking facility into a public parking garage. As you well know, LICH obtained the support of the community and its elected officials for the de-mapping of Van Voorhees Park for the sole purpose of providing accessory parking for medical staff and visitors, as is stated in City Planning Commission decision referenced in the garage certificate of occupancy. It is fair to say that this deeded parkland would never have been exchanged for a public for-profit parking garage. This unlawful use must cease immediately.

Lastly, as you must know, the development and maintenance of the LICH site is governed in part by the Agreement between LICH and the CHA dated January 1984, as amended on May 29, 1987, and by an Agreement dated May 29, 1987 (copies attached), as well as agreements with the NYC Parks Department. As successors and assigns of LICH, we expect you to proceed in accordance with these agreements in all respects.

Our demands are simple – we ask that you conduct your activities on the LICH site in a manner that is both lawful and safe for community residents and in accordance with the agreements concerning this site.

Today, the Fortis Property Group released two versions of its plan to develop the former Long Island College Hospital site abutting the historic neighborhood of Cobble Hill, Brooklyn. For the last five months, the Cobble Hill Association (CHA) and Fortis have been in discussions under the auspices of Councilperson Brad Lander to create a plan that would serve the future residents of Cobble Hill, while preserving the characteristics of the neighborhood that drew those people in the first place. We recognize that change is inevitable, but from the beginning the community has consistently maintained that the buildings proposed were too tall and that the population density would overwhelm the existing neighborhood. Fortis agreed to enter into discussions with the help of Councilperson Lander. Unfortunately, they have steadfastly refused to significantly lower the height or scale back the density of the plans. Instead of listening to the concerns of CHA, last week they actually increased the square footage of the ‘As of Right’ plan by adding 262,500 square feet, an increase of almost 40%, mostly in the form of student housing.

The CHA remains committed to the process organized by councilman Brad Lander and hopes to move forward in productive discussions with its new neighbor.

For further information, please contact cobblehillassociation@gmail.com
Posted by Bahij at 10/20/2015 08:20:00 PM No comments:

What Do You Think About Cobble Hill's CitiBike Locations? 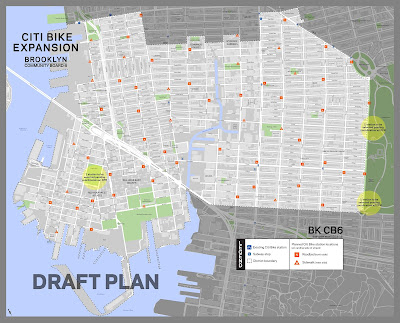 The above CitiBike expansion draft plan was presented at Thursday night's CB6 Transportation Committee meeting [click here for PDF]. In addition to Cobble Hill, stations will be installed in Red Hook, Gowanus, and Park Slope down to 14th Street. The Department of Transportation, who presented the plan with CitiBike, says that the station density will be lower in this phase of expansion than in parts of the original network. The docks will be deployed in 2016, and the entire phase two expansion is scheduled to be complete by 2017.

Below is a close up of the docks planned for Cobble Hill along with the legend. Two stations of note are in front of Cobble Hill Park, and Trader Joe's. There will also be three CitiBike docks on or near the Brooklyn Greenway on Columbia Street. This plan will not be finalized for a few months so you and Community Board Six still have a say. The Cobble Hill Association is collecting your feedback about the stations in our neighborhood to present to the DOT with CB6. Please fill out this survey to let us know what you think of the proposal. 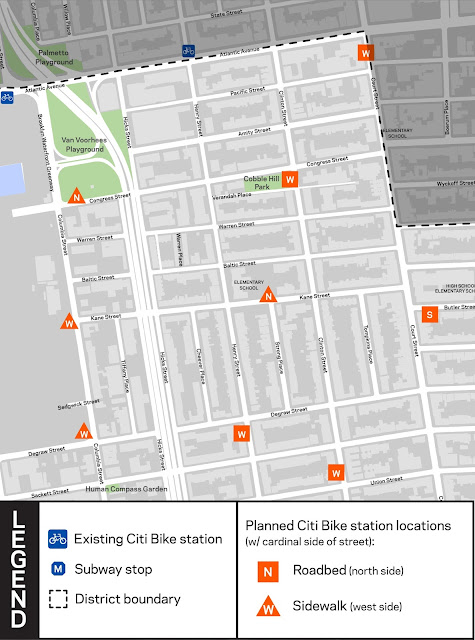 Halloween is Around the Corner!

Out come the cob webs, phantoms, and ghouls when the Cobble Hill Halloween Parade creeps up this autumn. Prepare your costumes for our annual gathering, and we'll see you in the park.
We're seeking volunteers to help with parade decorations and clean up. If you're available to help set up at noon or clean up at 8:30pm, please email Cobblehillassociation@gmail.com. 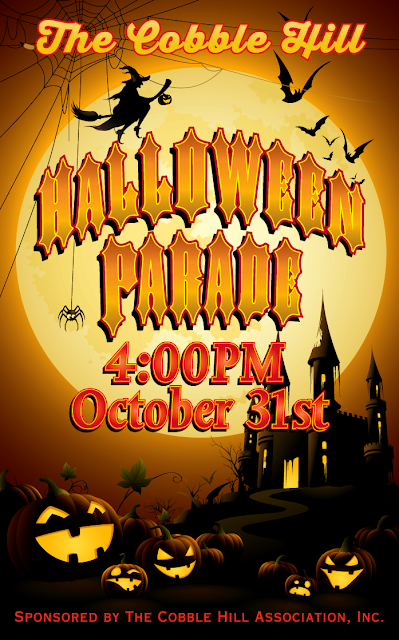 Compost and E-Waste are coming to Cobble Hill

Cobble Hill is getting even greener this fall, and it won't be the leaves. The city's organic waste pilot program has arrived in Cobble Hill. Starting October first, you may have seen little brown bins delivered to your home or your neighbor's yards. All single family homes and residential buildings up to nine units are included. The bins are collected from the curb along with your trash two times a week. The compost collection accepts all food scraps excluding meat, fish, and dairy. Yard waste is also accepted. For more information see the DSNY website.

Also coming up on Sunday, October 18th the Lower East Side Ecology Center's E-Waste Warehouse is hosting an electronics recycling day at PS 29. Bring your old batteries, lightbulbs, cell phones, computers and more. Proper disposal ensures these hazardous materials stay out of the earth and are reused if possible.

The NYU Langone Emergency Department is hosting a free Health Fair the weekend of the 17th and 18th. Free flu shots and healthcare screenings will be available. For more information see the Flyer below. 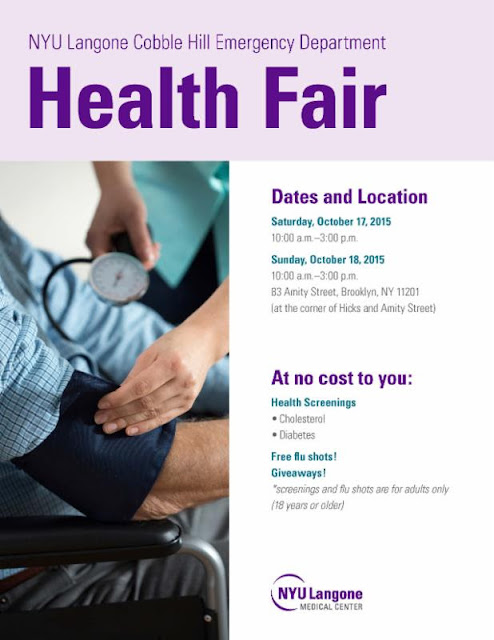 Assembly Member Jo Anne Simon has a few more months at home before it's back to Albany, and she wants to use them to meet her neighbors. The state representative wants to discuss our concerns in a less formal setting, so Simon is migrating from stoop to stoop in district 52 asking constituents to share their thoughts and questions. She will be in Park Slope tonight, and come to Cobble Hill on Tuesday, (details below). More info on the Daily Eagle.