Last year, more than 400 community members attended and offered valuable feedback on topics as far-ranging as school overcrowding, park planning and nightlife and many more... with everyone getting a chance to voice opinions in small discussion groups. It's a great way to let your representative know your concerns and help guide his work in Albany.

The Cobble Hill Association blog has been too busy for posts the past month.

Regretfully we were unable to write up our deep concern at Gov. Cuomo's potential closing of Long Island College Hospital, as well as our deep appreciation to the local electeds who helped keep its doors open. Thankfully, the local papers have plenty to bring you up to speed on our behalf.
* http://cobblehillblog.com/archives/6127
* http://www.brooklyneagle.com/categories/category.php?category_id=21&id=41361 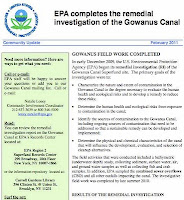 But now that we are back to blogging, we do want to alert you of another important matter on the horizon.

The EPA offers a public information meeting on the Gowanus Canal Remedial Investigation Report, to discuss the findings of the investigation, conducted by the EPA, to determine the nature and extent of contamination in the canal.

The RI is also available online at:
www.epa.gov/region02/superfund/npl/gowanus/ri_docs.html
For more information about the meeting or other site related issues you can contact Natalie Loney at loney.natalie@epa.gov or (212)637 3639.
Posted by Dave 'Paco' Abraham at 2/21/2011 03:54:00 PM No comments:

While much of the neighborhood's attention has been to the developing Brooklyn Bridge Park (and its unfortunate housing dropped into the park), there's another public space worth discussing;

Join the Brooklyn Greenway Initiative, Regional Plan Association, and your neighbors in a visioning for a new public open space on Columbia Street between Kane and Degraw Streets.

When the Van Brunt Street reconstruction and the Gowanus Flushing Tunnel construction are complete, the 80-ft deep area on the west side of Columbia Street is planned to become an open space element of the Brooklyn Waterfront Greenway. It is one of three open space nodes that we are either designing or commencing the community visioning process.

On February 2nd, background research that has been compiled will be shared with the Columbia Waterfront community.

What:  Columbia Waterfront Park Visioning Meeting
When:  Wednesday, February 2nd, 2011, 6:30-8:30 PM
Where:  The Union Street Star Theater, 101 Union Street
Please RSVP to info@brooklyngreenway.org with Columbia Waterfront Park in the subject line.
To see all the current research, download the briefing book here... http://bit.ly/gTD5po
Posted by Dave 'Paco' Abraham at 2/01/2011 02:54:00 AM No comments: