After today's rally to show local support for our community's hospital, Assemblywoman Millman began an online petition at change.org to further demonstrate the significance of this institution. Please click below and add your name to the list of supporters.
http://www.change.org/petitions/chairman-h-carl-mccall-of-the-state-university-of-new-york-keep-university-hospital-brooklyn-at-long-island-college-hospital-open

Friday Rally to Save the Hospital

Having a strong long hospital is key to having a safe, strong, and healthy neighborhood. Recent articles have described financial troubles at Long Island College Hospital but the Cobble Hill Association remains committed to fighting for its survival. 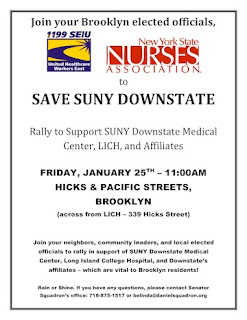 Tomorrow morning, Friday Jan 25th, State Senator Daniel Squadron will be rallying to save LICH. Details are available on the flyer above.
Posted by Dave 'Paco' Abraham at 1/24/2013 02:01:00 PM No comments: 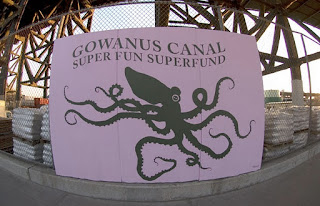 The U.S. Environmental Protection Agency in late December released its Proposed Remedial Action Plan (PRAP) for the Gowanus Canal, which "describes the remedial alternatives considered for the Gowanus Canal Superfund site and identifies the preferred remedy with the rationale for this preference."

The preferred remedy being proposed by the EPA, for the upper and mid-reaches of the canal, consists of dredging all the hazardous "soft sediments" that have accumulated above the canal's native sediments, installing a multi-layered cap atop the native sediment, and stabilizing the native sediments in place in the areas of greatest contamination.  For the lower reach of the canal, the preferred remedy consists of the first two steps, minus the in-situ stabilization.  There are varied plans for the disposal of dredged materials.  In addition, the EPA is recommending the dredging of the filled-in 1st Street Turning Basin.  The EPA estimates the total cost of the preferred remedy at somewhere between $467 million and $504 million.

Furthermore, the EPA is recommending steps to prevent the recontamination of the canal through Combined Sewer Overflows (CSOs), as well as through the migration of harmful substances from contaminated upland sites.  The preferred remedy also presumes that the New York City Department of Environmental Protection will install retention basins with capacities of several million gallons at the canal's two largest sewer outfalls to help significantly reduce CSO events.

The 43-page Proposed Remedial Action Plan is available online as a PDF, at http://www.epa.gov/region2/superfund/npl/gowanus/pdf/gowanus_prap.pdf.  The EPA will accept public comments until March 28th.  Written comments can be submitted via email to GowanusCanalComments.Region2@epa.gov, by fax to (212) 637-3966, or by mail to:

The EPA is also holding two public meetings this week, on January 23rd and 24th, to present the conclusions of the Gowanus Canal Remedial Investigation and Feasibility Study, provide further elaboration on the reasons behind its recommendation, and to accept public comments.  Details of those meetings are as follows:

All comments made orally or submitted at the public meetings, and all comments submitted in writing by mail or electronic means, will be documented in the Responsiveness Summary Section of the Record of Decision, the EPA document that formalizes the selection of the final remedy.

The Superfund cleanup of the Gowanus Canal will have a profound impact on the neighborhoods that surround it.  We encourage you to review the PRAP, attend one of the meetings, and, if you're so inclined, to weigh in with comments.
Posted by Dave 'Paco' Abraham at 1/22/2013 10:31:00 PM 1 comment:

The Carroll Garden Patch inquired about Christ Church's reconstruction and unfortunately got word that designs have still not yet been finalized. Take a read of Joanna Prisco's full article at the link below.
http://carrollgardens.patch.com/articles/christ-church-steeple-reconstruction-delayed-indefinitely
Posted by Dave 'Paco' Abraham at 1/12/2013 12:18:00 PM No comments:

We already chipped some Xmas trees last weekend at Cobble Hill Park, but this weekend it will continue with the Parks Department Mulchfest 2013. Please remember to remove all lights and ornaments before bringing the tree to the park and make sure to bring it only within the designated hours.