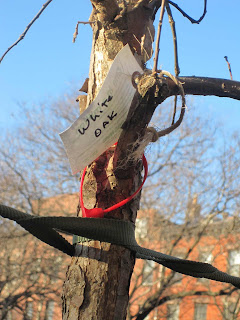 Much of Cobble Hill's beauty comes from the hundreds of fully grown trees canopying the neighborhood. While most grow more beautiful as they mature, some trees must be trimmed or removed entirely as branches die. This past summer two trees on Clinton Street (one at the corner of Verandah Place, and one opposite Cobble Hill Park) were cut down and dug out by the parks department. Thankfully, two replacements have just gone in recently. It'll take many years for them to recreate the green glory of their predecessors but be sure to stop by and show some eco-appreciaton for the new White Oak and Golden Rain Tree next time you're strolling Clinton Street. 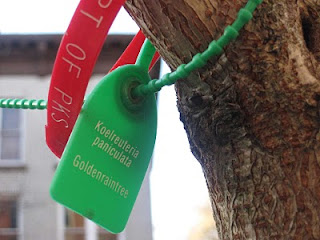 In other tree news... Xmas is over so please remember to recycle your trees at the Cobble Hill Mulchfest.

Drop off your Christmas trees at the location below. Wreaths and garlands cannot be accepted. Please remove lights and decorations. No artificial trees!

MULCH BAGS WILL BE AVAILABLE FOR THOSE WISHING TO TAKE MULCH FOR THEIR GARDENS OR TREE PITS. 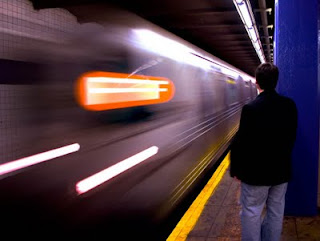 If you live in Cobble Hill and take the train, odds are you've stood on the Bergen Street platform and watched packed subway car after packed subway car rolls through during the morning rush hour. This chronic problem needs a solution and State Senator Squadron has pushed the MTA to conduct a full line review of the F Train.

In October, the MTA released the findings from this review in a comprehensive report (available at: www.squadron.nysenate.gov). To make this report even more accessible to the public, Senator Daniel Squadron and Community Boards 2 & 6 invite you to attend a Town Hall Meeting about the F train. MTA representatives will discuss the recent report about F train performance, and discuss proposals for improving service.
F Train Town Hall
Hosted by State Senator Daniel Squadron
WHEN: Thursday, December 10, 6:30 pm
WHERE: PS 58 Auditorium
330 Smith Street, Brooklyn NY
(Corner of Smith and Carroll streets, at Carroll Street stop on the F line)
Amazing image of F train in action is republished from venusinfurs.net/2006/06/10/f-train/
Posted by Dave 'Paco' Abraham at 12/04/2009 09:49:00 PM No comments: 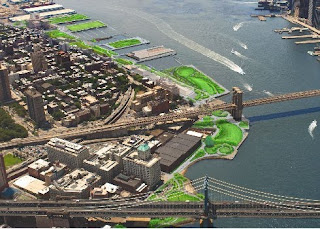 This coming Monday, Senator Squadron will be hosting a meeting to give the community an opportunity to hear a presentation from the City of New York about Brooklyn Bridge Park.

Since the 1985 the Cobble Hill Association has worked to create a great park to honor the Brooklyn Bridge and to serve the growing population of young families with year round recreational facilities, welcoming entrances, access along its length, and a financial plan that does not privatize public parks with housing inside its borders.

Mayor Bloomberg now wants the State to give him control of the Park.
Please come to a meeting at which the Mayor's plan will be presented: This Monday, December 7th at 7 PM at Long Island College Hospital.

Please ask the Mayor:
1. Will he eliminate new housing that has been shown to be unnecessary and corrosive to this park?
2. Will he put back the recreational facilities taken out in favor of landscaping for condos?
3. Will he support Senator Squadron's plan for financing, or other plans we have put forth over the years to support this park's operations?

We apologize for the delay in notifying you about this meeting. It is the mayor's timing, not ours. But this is an important meeting and do hope you will be able to attend!
Posted by Dave 'Paco' Abraham at 12/04/2009 09:42:00 PM 4 comments: