The Cobble Hill Association is now online at cobblehill.nyc. 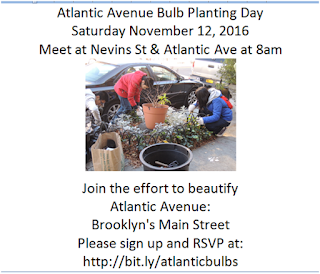 The DOT is hosting a public meeting about the BQE Rehabilitation plan for the triple cantilever, between Atlantic Ave. and Sands Street. Details in the flyer below: 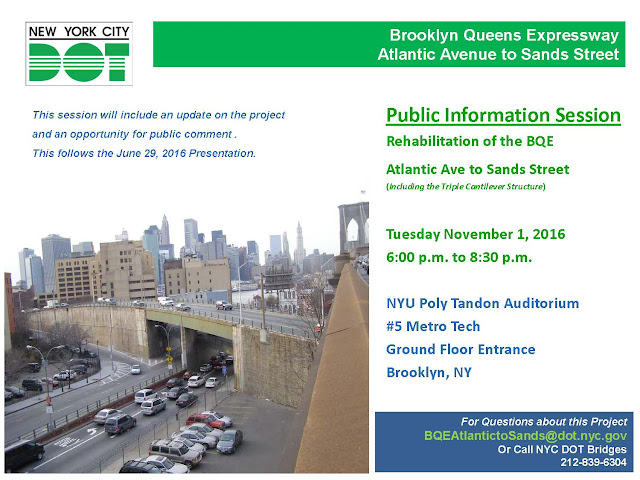 The Cobble Hill Halloween parade will be on Halloween evening, Monday, October 31st at 4:00pm. Meet in Cobble Hill Park dressed to impress. Please contact us at cobblehillassociation@gmail.com if you are interested in volunteering to help decorate the park and clean up.

Great news for fans of music in Cobble Hill Park! The summer concert series was so popular, two more events have been scheduled:
The Jose Conde trio
Saturday, October 22 at 3:00 pm

Next Concert in the Park Tuesday August 2, Featuring AudraRoxSteady 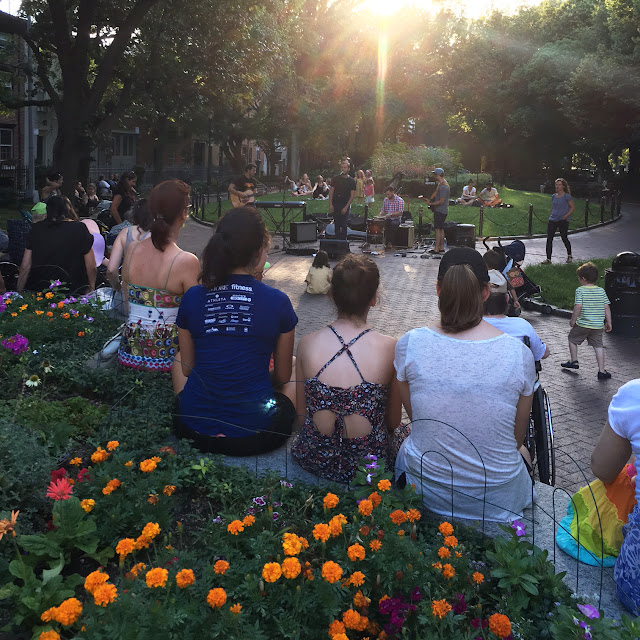 If you were at Cobble Hill Park last night for the second of our annual outdoor concerts then you had a fabulous evening! The Brooklyn band Rookin was cookin'! Don't miss the next one: Audra Rox on Tuesday, August 2. Concerts begin at 7pm in Cobble Hill Park. We hope to see you there!
Posted by Bahij at 7/28/2016 05:42:00 PM No comments:

Next Concert in the Park Tuesday the 26th, Featuring Rookin 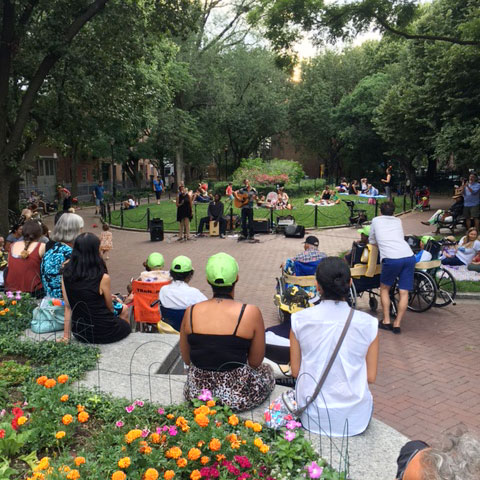 This Tuesday, SweetCane brought out the neighbors to groove out in the park. The second concert of the series features Brooklyn-based folk/soul group Rookin. You can listen to and buy their EP The Lookout here. As always the concert is free and open to the public, at 7:00pm, Tuesday the 26th in Cobble Hill Park.

The final concert of the season will be the following Tuesday, August 2nd, featuring AudraRoxSteady.
Posted by Bahij at 7/22/2016 10:30:00 AM No comments: 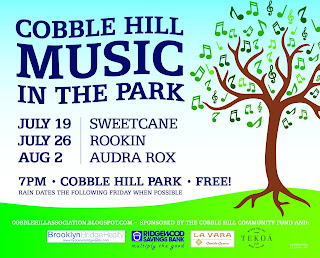 Save the dates! Cobble Hill Music in the Park returns, beginning July 19 at 7 p.m. Enjoy a carefully curated musical series of outstanding performers. Forget about the construction and mingle with the good people of our neighborhood.

July 19
SweetCane
Get ready for SweetCane’s vintage Reggae and Afrobeat rhythms with infusions of bluesy funk, soul, and R&B. 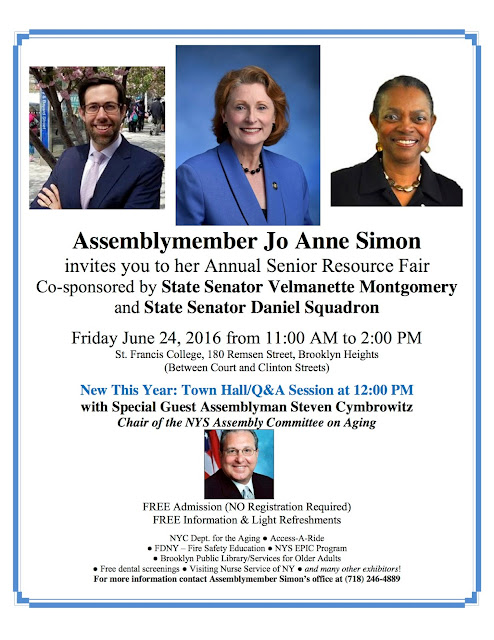 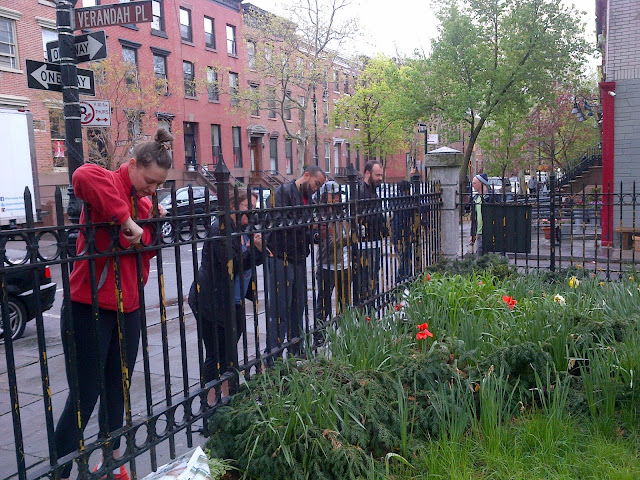 This year’s special assignment is the fence upgrade, organized by longtime resident Barbara Krongel, in which several hundred feet of fencing are being scraped, primed, and painted. "That fence is a major feature," Krongel said, "and when it's shabby, the entire place is affected." John Parker, owner of JP Interiors, arranged for a Benjamin Moore representative to inspect the site and make recommendations. "I know many of my customers love the park and I wanted to contribute," he said. And JP Interiors’ staffers contributed as well, by helping with scraping and prep work. They aren’t the only generous friends of the park: Matt Mazzone of Mazzone's Ace Hardware donated paint and supplies, while store manager Liz Civiletti and staff answered endless questions from the willing but inexperienced volunteers. The local NYC Parks Department district office has provided logistical support.

Because the job is so enormous, other organizations are also pitching in. Hannah Gall and Jaimie Beddoe of Partnership for Parks, a joint program of City Parks Foundation and the NYC Parks Department, recently fielded a crew of over seventy fence-painting volunteers from Viacom. And new Cobble Hill resident, Liz Ott, an operations manager with YouTube, is recruiting colleagues from her office for a June 30th volunteer day at the park.
Posted by Bahij at 6/10/2016 09:05:00 AM No comments:

Recycle Your E-Waste at P.S. 29 This Saturday

The Lower East Side Ecology Center is holding an e-waste drop off event this Sunday at P.S. 29 from 10am - 4pm. You can bring old phones, computers, batteries, light bulbs, and other defunct electronics for them to be recycled or properly disposed of through the Gowanus E-Waste Warehouse. Event details and flyer below: 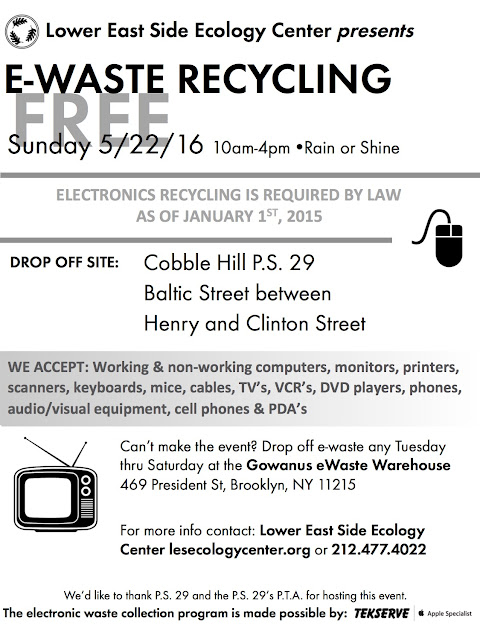