A new Business Improvement District is in the works for Court & Smith Streets. How's it work? First, a group of local property owners, commercial tenants, and residents come together and set up an organization (the steering committee) which then draft the district plan. The second phase is to document local support. When enough local support has been demonstrated, the BID formation moves into the final, legislative phase. Right now the Court-Smith BID is nearing the end of phase two.

Next week there will be two events providing more information on the BID that will review the plan and answer any questions people might have. If interested in attending, check out of the sessions listed below. Both meetings are informal - people can show up whenever they want and have a drink on the steering committee's tab.

This Thursday, February 16th, the Cobble Hill Association joins many other groups from Brooklyn and beyond in supporting a town hall forum on the developing MoveNY traffic/transit plan. Today, the final version of the plan was officially announced and it has already garnered tremendous support. Read some of the press highlights linked below for more background, and join on Thursday to hear more in person and get your own questions answered. 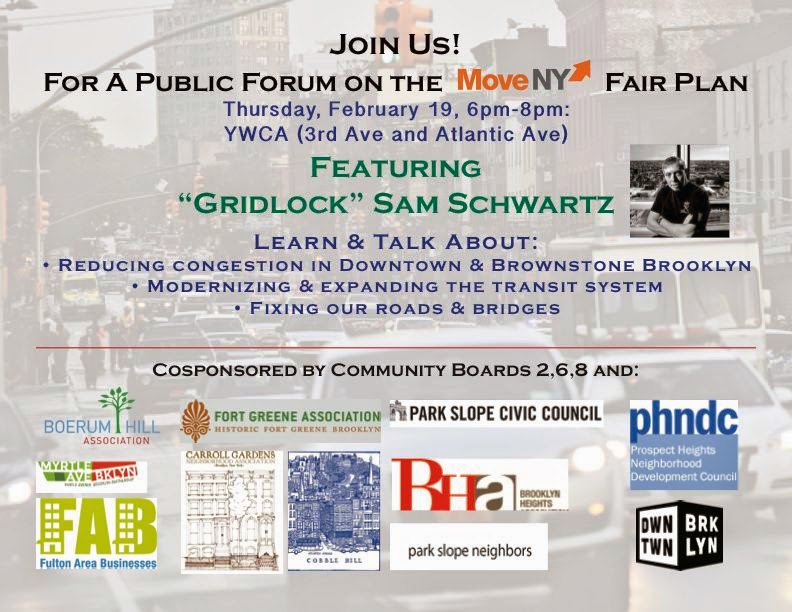 Last fall the Cobble Hill Association invited transportation advocates to the general meeting to present their Move NY plan, a proposal to increase fairness across the city's bridge tolls but reduce vehicle congestion. The plan was well received and soon after the CHA executive board officially endorsed it. Now, ten other nearby civic groups have endorsed it too and together we are all sponsoring a Town Hall style forum for former Department of Transition Commissioner Sam Schwartz to present it before a larger audience on February 19th. See the flyer above and join your neighbors to learn more about this potential plan that could benefit drivers and straphangers alike.

Learn and talk about:
Reducing congestion in downtown and brownstone Brooklyn
Modernizing and expanding the transit system
Fixing our roads and bridges

Captain Natalie Maldonado had been the commanding officer of Transit Division 32, which covers all of the subway stations in Crown Heights and its immediate surroundings, since April of 2014. Captain Justin Lenz had been leading the 76th since the fall of 2013. To review some of his stellar work, read the Red Hook Star Revue's in depth article on him from last fall.
Posted by Dave 'Paco' Abraham at 2/02/2015 10:39:00 AM No comments: