While the closed-door decision to shutter Long Island College Hospital had been voided by a judge for non-compliance with state open-meeting laws, SUNY Downstate officials reconvened in a public meeting yesterday and voted again to close LICH.

However, all hope is not lost. CHA Board Member Jeff Strabone has studied the NYS Comptroller's audit of SUNY Downstate and files this report below.

The SUNY Board of Trustees has voted to seek the NYS Department of Health’s approval to close LICH. The Trustees claim that LICH is a financial burden on SUNY Downstate. Despite SUNY’s spin, the evidence tells a different story:

The documentary evidence in this report, compiled strictly from the NYS Comptroller’s audits of SUNY Downstate and SUNY’s own online data, shows that SUNY Downstate is over $100 million in the red even without LICH. In fact, LICH was on the rebound before its takeover by SUNY, as shown below, with losses of only $4.7 million in 2010, the year before the merger.

As the NYS Comptroller’s audits show, SUNY Downstate is financially incompetent. And, as SUNY’s own materials show, at the same time that SUNY is moaning about the difficulties hospitals face in today’s market, they want to close LICH in order to open another hospital elsewhere in Brooklyn. Meanwhile, the state legislature is considering a bill to allow a for-profit corporation to operate hospitals specifically in Brooklyn. All the evidence appears below with links to the sources. Happy reading!

1. SUNY was looking into LICH's real-estate value even before the NYS Comptroller's audit in January 2013.

SUNY Downstate admitted in comments to the NYS Comptroller that they had appraisals of LICH's real estate.
NYS Comptroller's audit, page 19, SUNY's comments on the draft audit:

'DMC [Downstate] does have recent appraisals that show values of the PPE ranging from $280-$500 million, which results in assets exceeding liabilities.'


2. The State's declining support has driven SUNY Downstate's downfall.
The State itself has pulled the rug out from SUNY Downstate. You can't blame LICH for that.
NYS Comptroller's audit, page 10:

'According to Hospital officials, when the State Medicaid program cut reimbursement for psychiatric, acute care and rehabilitation services in 2011, the Hospital had to absorb a $20 million loss.'


3. LICH was on the rebound before SUNY took over. SUNY itself? Not so much.

SUNY Downstate acquired LICH in May 2011 and ran it into the ground. In 2010, the last full year before the takeover, LICH was on the rebound.
NYS Comptroller's audit, page 10:

Meanwhile, SUNY Downstate was running itself into the ground all on its own.
NYS Comptroller's audit, page 10:


4. At the same time that the SUNY Board of Trustees is trying to close LICH and moaning about the difficulties hospitals face, they are simultaneously planning to open a new hospital elsewhere in Brooklyn.

According to page 4 of SUNY’s February 28, 2013 Power Point presentation, phase three of their Plan, after closing LICH, is to open a new hospital elsewhere.

'Phase 3 – Pursue a Brooklyn Solution and Long-Term Sustainability for Downstate Medical Center.
Develop a plan for creating a Brooklyn hospital consortium, including significant affiliations and partnerships that will serve to make Downstate Medical School the medical school for hospitals in Brooklyn. Explore the potential of the consortium to develop a new hospital for central/northern Brooklyn.'
http://www.suny.edu/Board_of_Trustees/webcastdocs/9%20-%20Future%20for%20Downstate%20Medical%20Center.pdf


5. SUNY Downstate is incompetent. Don't believe us. Take it from the NYS Comptroller.

'Primary reasons for the Hospital’s financial stress include: the costs associated with the acquisition and operation of the LICH and Bay Ridge facilities amidst an already deteriorating fiscal environment; the failure to take timely actions to address emergency health care issues impacting the Brooklyn community; and weak governance and ineffective financial management.'

NYS Comptroller's audit, page 6:
'The report concluded that Downstate had poor procurement practices that led to fraudulent and uneconomical vendor selection, inefficient implementation of a multimillion dollar software system, and conflicts of interests between an employee and a vendor. These deficiencies likely contributed to the financial distress at the Hospital.'


7. SUNY Downstate has no plan, never had a plan, and ignores its own consultants' recommendations for cost-cutting.

How incompetent is SUNY Downstate? They don't even have minutes of their meetings with their accountants, let alone a financial plan!
NYS Comptroller's audit, page 8:

SUNY Downstate paid $3.1 million to Pitts Management Associates, a consultant, to find ways to cut costs. Pitts found $65.7 to $70.7 million in savings, but SUNY Downstate did nothing to implement the cuts.
NYS Comptroller's audit, page 13:

'In November 2011, Pitts identified several measures that would enhance revenues and save money. According to Pitts, these actions could be undertaken immediately and would result in $70 million of savings [...] Although nearly a one year had passed since the action steps were identified, as of October 2012, Hospital officials were unable to provide any documentation and analysis to track the savings achieved on an ongoing basis by implementing the steps identified by Pitts. We believe that it is essential that Hospital management be able to demonstrate the status of all steps recommended by the consultant and the actual and projected short term and long term fiscal impacts accruing from them.'

'In addition, Hospital officials anticipate that as much as $20 million in additional contract payments to Pitts will also increase the structural cash shortfall. In December 2012, the State approved a 9-month contract worth $5.6 million with Pitts.'

CONCLUSION
LICH is not the problem. SUNY Downstate is the problem.
SUNY is trying to sacrifice LICH to pay for its own sins of mismangement and incompetence. Our communities in Brooklyn should not be the scapegoats. The solution:

Streetsblog recently noted that "eight city council members have put a portion of their discretionary capital funds up for a vote as part of an exercise in participatory budgeting, which allows residents to decide how the money will be spent in their own neighborhoods." One of those councilmembers is our very own Brad Lander, who will be hosting an expo this Thursday, March 21st, where residents can learn more about the projects that have been suggested to receive some of the $1 million in discretionary capital funds he has offered up to a public vote. 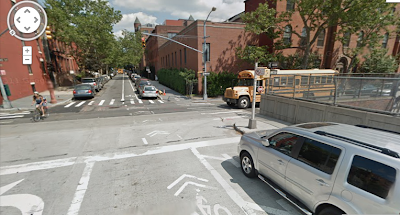 The Cobble Hill Association is very pleased that one item on the upcoming ballot will be the addition funds to an existing DOT project on Hicks Street. This will include concrete curb extensions that greatly improves visibility at the dangerous intersection with Congress Street. It is a concern brought up by locals time and time again, and we urge resident to attend the science fair-style expo to learn more details.  It takes place this Thursday from 6:30 to 8:30 p.m. at the Park Slope branch of the Brooklyn Public Library.

Actual voting dates and times are listed on Councilman Lander's Participatory Budgeting page and pasted below. 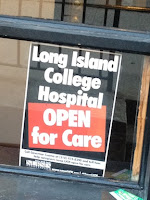 Read more at DNA info HERE as well as at the Brooklyn paper HERE..

Noted from this week's Brooklyn Eagle ...
"In a crowded courtroom of over 60 spectators and attorneys, oral arguments were heard Friday on the state's move to close Long Island College Hospital. The judge who had temporarily stayed the State University of New York from acting on its decision to kill LICH deferred a decision and continued the stay.

While both sides were “commended” by Brooklyn Supreme Court Justice Johnny Lee Baynes for submitting “excellent memoranda” on the issues, Baynes made clear that the previously issued stay would remain in effect until he renders a “comprehensive decision.”
For the full article click here... and also check out McBrooklyn's coverage, right here.
Posted by Dave 'Paco' Abraham at 3/11/2013 08:00:00 AM No comments:

The experts at the Municipal Art Society have marked another Cobble Hill History Tour on their upcoming calendar. While this one is different from the past CHA one led by our local historian Francis Morrone, it nonetheless sounds like an intriguing event.


The Churches of Cobble Hill: The Here, the Now, the Long Ago and the Forgotten

Many houses of worship in Cobble Hill have undergone metamorphoses over the years. In this part of what was once known as “the City of Churches,” some houses of worship remain functioning while others remain only in form. Still more have disappeared altogether or been forgotten; some have left behind an architectural fragment. This tour with guide Mary Ann DiNapoli explores churches that are or once were in this picturesque landmarked district. Those who have been on this tour before will learn of a devastating turn of events that has occurred at one of the tour's destinations since this tour was last given. Cost: $20 / $15 Municipal Arts Society Members.

Long Island College Hospital continues to make headlines recently. The community very clearly disagrees with LICH board's recent decision to close its doors and speculates potential real estate profits is too much of a motivating force. However, with a fatal crash on Clinton & Atlantic just last week, it is readily apparent that Brooklyn cannot lose another emergency & ambulatory care facility. Preemptively, we have supported local legislators' push to get the existing hospital structures landmarked within the context of the adjacent historic district. This could prevent demolition and reduce incentives for developers to swoop in and build luxury condos when our community really needs a center for health care. Looking ahead though, we hope to see a new suitor for our neighbors' health needs and have taken out this full page ad in the Brooklyn Paper. 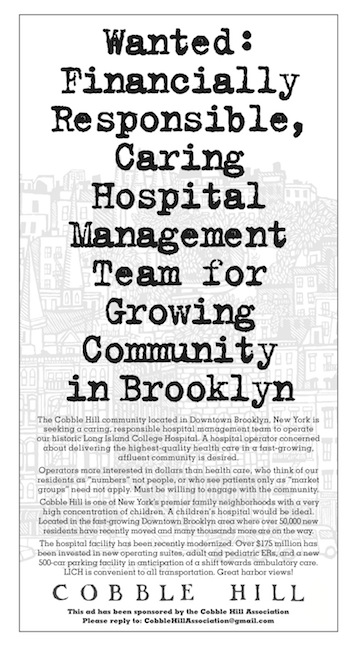 It quickly caught the attention of Erik Enquist at the highly respected Crain's New York Business paper, who ran this summary in the journal's Health Pulse section.


The Cobble Hill Association has diagnosed a case of "hospital management malpractice" at Long Island College Hospital... saying it "is seeking a caring, responsible hospital management team to operate" LICH. "A hospital operator concerned about delivering the highest-quality health care in a fast-growing, affluent community is desired," reads the ad. "Operators more interested in dollars than health care, who think of our residents as 'numbers' not people, or who see patients only as 'market groups' need not apply."