Go to Jail this weekend!

Although the Brooklyn House of Detention has sat empty and dormant for several years now, the monolith at Smith Street and Atlantic avenue, is set to re-open with inmates at the end of the month. Though it's just outside of Cobble Hill proper, new activity at the jail house is sure to have an effect on our neighborhood. In preparation for the re-opening, the New York City Department of Correction (DOC) is inviting the community to attend an open house next Saturday, February 4, from 10:00 a.m. to 1:00 p.m to meet Warden Walter Nin, ask questions and tour the facility.


To take advantage of please RSVP to Delilah Ortega in the DOC Department of Public Information at Delilah.Ortega@doc.nyc.gov or (718) 546-0631.

For more details on the House of Detention, check out coverage from Cobble Hill Blog, Curbed, and Gothamist.
Posted by Dave 'Paco' Abraham at 1/30/2012 08:30:00 AM No comments:

Last week, the Department of Transportation unveiled plans for improvements to Atlantic Avenue's intersection with the BQE entrance ramp adjacent to Palmetto Playground. For years, residents and civic leaders have been asking for changes to the intersection, even before sections of Brooklyn Bridge Park were built. Now that parts of the park have opened and draw visitors to Pier 6 everyday, these improvements cannot be installed soon enough. The dangerous right turn on red will be eliminated, and new pedestrian refuge islands will be poured to shorten crosswalk distances. Additionally, the geometry for vehicles turning left onto the BQE ramp will be better delineated with a new concrete median preventing cars from turning to wide, or two at a time on the expressway.

Combined with the redesign at Columbia and Atlantic unveiled over the summer, we're glad to see safety enhancements made a priority for our community.

Last week, The Regional Planning Association along with The Brooklyn Greenway Initiative unveiled new renderings for a planned Columbia Waterfront Park. It could easily link to the existing protected bike path along Columbia Street while also offering unique views of the borough's industrial waterfront with an impressive Manhattan skyline as a backdrop.

Rich Calder's report in the NY Post offers full details on the potential 2 acre park, which would be a great step forward that ensures avoiding the Bloomberg administration's previous plan to revive the area with out of scale luxury condos and conference centers.

For the full report, see the following link.http://www.nypost.com/p/news/local/brooklyn/craning_for_view_in_klyn_YBDrOUE3KxFT8FZbytnPiM#ixzz1kGSEckcr
Posted by Dave 'Paco' Abraham at 1/23/2012 12:00:00 PM No comments:

While PS58's auditorium is already hosting tonight's meeting regarding the Public Place remediation along the Gowanus, it now seems the local elementary school will be host to another important meeting on Tuesday night @ 7pm.

With a massive cleanup long overdue, the Environmental Protection Agency thankfully released its Feasibility Study (FS) for the Gowanus Canal at the end of 2011. It intends to "develop and evaluate remedial alternatives for Gowanus Canal sediments that will reduce or eliminate unacceptable risks to human health and the environment from exposure to contaminated sediment and surface water in the canal."

Local blog Pardon Me for Asking has been covering all the details thoroughly, with links to the full 550 page document here. For anyone interested in learning more about the clean up, please attend the EPA's public information meeting on the FS on Tuesday, January 24th at 7 PM in the auditorium of Public School 58, 330 Smith Street.

This Monday, January 23rd, will be an important meeting for Cobble Hill residents and all neighborhoods within earshot of the Gowanus Canal as the clean up of the toxic 'Public Place' gets underway. Please see details below and follow the link to a fully detailed report.

The Gowanus Canal Community Development Corporation is hosting a public information meeting to alert area residents of the impending health risks once National Grid begins clean up of the Public Place site (due to commence in February). And employing inadequate monitoring of potentially harmful vapors when coal tar is exposed to the atmosphere. A detailed report is available at this link http://bit.ly/AE33xJ 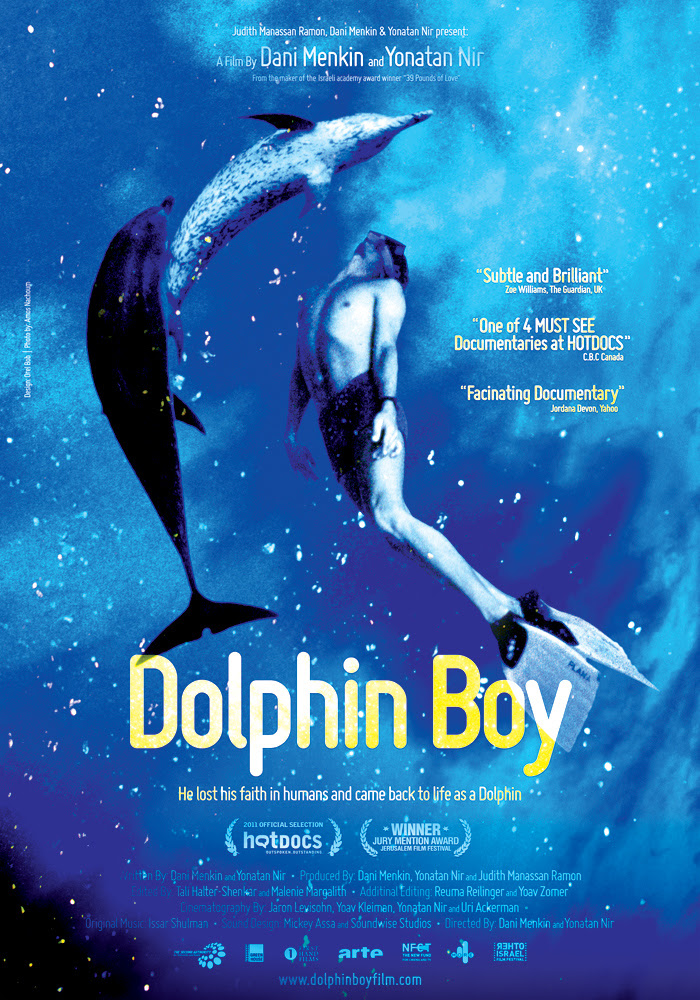 Brooklyn's Israeli Film Festival is coming back to Cobble Hill at the end of the month, with three days of screenings at the Kane Street Synagogue. The series will showcase three films (The Debt, Restoration, and Dolphin Boy) and we encourage everyone to pay a visit to this gem in our neighborhood.

We previously noted the new developments slated for 2-4 Strong Place, on the corner of Kane Street. This week, the architect and developer of those three new row houses have graciously and generously offered to present the proposed plans to neighbors and interested community members. If you are interested in seeing the plans for these new buildings, you are cordially invited to attend a meeting this coming Tuesday evening.

All are welcome to attend this community meeting. Please feel free to share this invitation with any interested friends and neighbors.

While Cobble Hill's borders technically end at Hicks street, Columbia Street is just one block farther and very much a big part of what makes the neighborhood so great. So, please join our friends from the

Brooklyn Greenway Initiative and Regional Plan Association, for a meeting on January 18th to make Columbia Street even greater with the planning for Columbia Waterfront Park -- a new public open space on Columbia Street between Kane and Degraw Streets.

From the BGI press release...
When the Van Brunt Street reconstruction and the Gowanus Flushing Tunnel construction are complete, the 80-ft deep area on the west side of Columbia Street is planned to become an open space element of the Brooklyn Waterfront Greenway. At last year's visioning meeting, ideas were collected from the Columbia Waterfront residents and businesses about what sort of improvements and facilities would be most beneficial to the community.

At the report-back meeting on January 18th, we will share preliminary renderings for the park design and gather community feedback.


RSVP to info@brooklyngreenway.org with Columbia Waterfront Park in the subject line.

This weekend saw another successful Mulchfest in our neighborhood.  Over 500 Christmas trees were collected and chipped in Cobble Hill Park with the help of the Cobble Hill Tree Fund and NYC Department of Parks & Recreation. 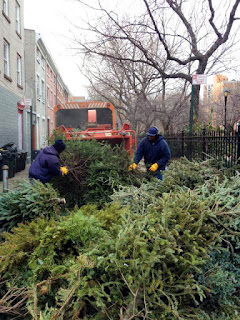 While trees are an important part of holiday decorations, please remember to always dispose of them properly. NYC Sanitation will collect trees left on the sidewalk with regular trash collection, but bringing them to mulchfest sites allows them to be made into wood chips that nourish trees and plants on streets and gardens citywide.
Posted by Dave 'Paco' Abraham at 1/11/2012 11:00:00 AM No comments: 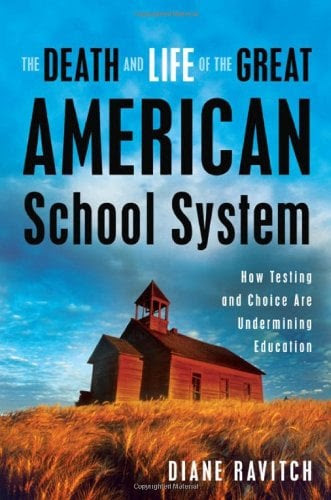 Our local elementary school, P.S.29, will begin a speaker series on education... kicking off tomorrow with noted historian Diane Ravitch, author of The Death and Life of the Great American School System: How Testing and Choice Are Undermining Education and many other books and articles and Research Professor of Education at New York University. Admission is free, and all are welcome; childcare will be provided for P.S. 29 parents.

The education series continues in the year with the following speakers.
Peg Tyre: March 7 (author of The Good School: How Smart Parents Get Their Kids the Education They Deserve)
Paul Tough: September 2012 (author of Whatever It Takes: Geoffrey Canada’s Quest to Change Harlem and America)

Our BQE, eternally in need of repair

This morning the NY Times published a great article detailing our area's widespread disgust with the eternally wretched conditions of our nearby highway, the Brooklyn-Queens Expressway. Those in Cobble Hill vicinity may already know that the NY State Department of Transportation recently nixed key studies it had begin on the roadway's condition, despite years of community involvement and the blatantly obvious need for countless repairs.

We were told by the state that the BQE was in danger of collapsing in the 80s... It’s also pathetic that they put all these years and effort in, spent money on all sorts of designs and are now dropping it.

Trees are already piling up at the entrance to Cobble Hill Park, but remember... the Tree Chipping/Mulchfest is not until this weekend!

For full details, check out this link....
http://cobblehillassociation.blogspot.com/2011/12/cobble-hill-mulchfest-2012.html