The Cobble Hill Association has long advocated for a true park along the east river, to serve as a year round recreational amenity for our residents. Brooklyn Bridge Park was to have been a year round active and passive recreational park. When the community plan for Brooklyn Bridge Park was replaced by private high rise condos with landscaping surrounding commercial buildings, the CHA worked hard to restore the year round recreational amenities that were taken out by the presence of condos. 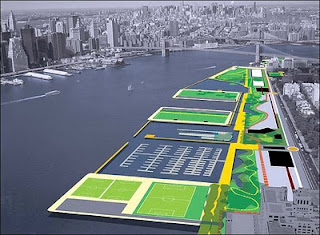 Today, after 30 years of planning and 7 years of strenuous advocacy by the Cobble Hill Association and the coalition of neighborhood associations united under the Brookyn Bridge Park Defense Fund, we are very pleased to announce that a donor has come forward, offering to build a year round recreational facility at the south end of Brooklyn Bridge Park. This donor, Joshua Rechnitz, is proposing to build a $40 million year-round recreational center for public use. And while details about the facility will emerge in the coming months, we hope area residents will celebrate this generous donation by Mr. Rechnitz and tune in as plans coalesce. His generosity, initiated completely on his own, is a big statement for philanthropy in NYC today and wonderful news for area residents!

To read the full press release, check the links after the jump.
Press Release


Today, at the board of directors meeting of the Brooklyn Bridge Park Corporation, Regina Myer, president of the park, announced that Joshua Rechnitz, founder and Chairman of the New York City Fieldhouse Inc. (Fieldhouse), a not-for-profit corporation, offered to underwrite the design and construction costs of a year-round, multi-use recreation facility near Pier 5. The facility is estimated to cost $40 million and represents one of the largest donations ever made to a New York City park.


“This is a very exciting project and presenting our vision to the Brooklyn Bridge Park Corporation is an important milestone,” said New York City Fieldhouse founder and chairman, Joshua Rechnitz. “We want this to truly be a community endeavor that will add amenities for park users and provide a much needed all-weather sports facility.”
The proposed facility would be located primarily on Furman Street on a site now partially occupied by a cinderblock building used for storage and construction by BBPC and currently programmed for future operations and maintenance needs. The state-of-the-art indoor recreation, cycling, and community facility will be open for public use.
The Fieldhouse is envisioned to include a 115,000 sq. ft. indoor recreation center with a 200-meter inclined track for cycling and a 22,000 sq. ft. infield for high school, collegiate, club-level and professional sporting events, such as basketball, tennis, track cycling, volleyball, and gymnastics. It also includes key amenities for the park such as a public boathouse, public restrooms, and maintenance and operations space for BBPC.
The proposal will undergo extensive community consultation by staff and representatives of the not-for-profit starting with a briefing to the Brooklyn Bridge Park Community Advisory Council. Additionally, the proposal will be presented to neighborhood, educational, and athletic organizations for their input, as well as upcoming meetings of Brooklyn Community Boards 2 and 6. Four public meetings in Cobble Hill/Carroll Gardens, Sunset Park, Brooklyn Heights/Dumbo, and Red Hook, will be scheduled in order to further gather feedback and better assess community programming needs. Once concluded, the Fieldhouse will refine its proposal and the Board of the BBPC will determine whether to accept the offer and commence requisite land use and environmental reviews that will include public comment periods.
The New York City Fieldhouse, Inc. is a new not-for-profit organization dedicated to promoting healthy and sustainable living in our communities through recreational and competitive sports with an emphasis on competitive track cycling. The New York City Fieldhouse, Inc. believes that New York City deserves both to benefit from the rapidly growing sport of competitive track cycling and to become a new world hub for the sport.
The New York City Fieldhouse, Inc. founder and chairman, Joshua P. Rechnitz, is a competitive amateur cyclist, track cycling enthusiast and philanthropist who is committed to establishing a world-class sports, cycling and recreation center in New York City. Mr. Rechnitz is following in the great philanthropic tradition of his late grandparents, Robert and Harriet Heilbrunn, who made significant contributions to cultural institutions like the Metropolitan Museum of Art and the Museum of Natural History, medical and academic endeavors at institutions like Rockefeller University and Columbia University and Johns Hopkins University and civic pursuits like the renovation of the East 72nd