Announcing an Important Public Meeting for the LICH Development Site 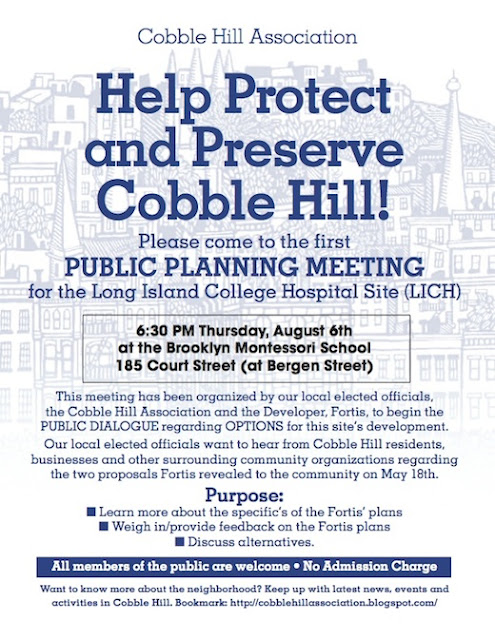 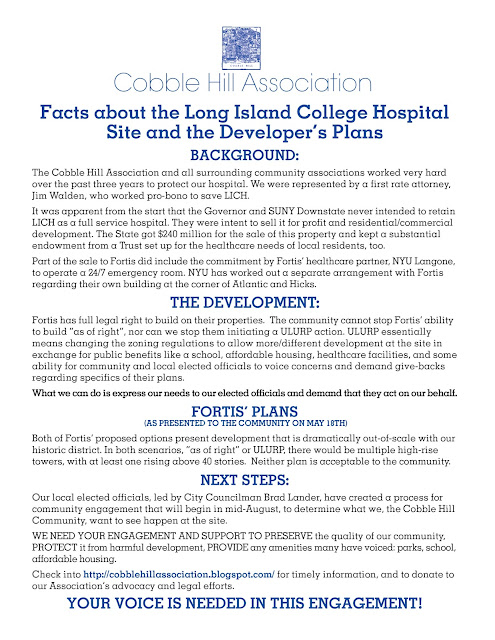 Thursday, August 6 from 6:30 to 8:30pm
at the Brooklyn Montessori School
at 185 Court Street (at Bergen Street)

This meeting will include a brief presentation of the options put forth by Fortis, followed by opportunities for community feedback and discussion. All are invited to attend.

The Cobble Hill Association would like to extend our special thanks to Council Members Brad Lander and Steve Levin, Brooklyn Borough President Eric Adams, State Senator Daniel Squadron, State Assembly Woman Jo Ann Simon, and Congress Woman Nydia Velézquez for all their hard work in decveloping htis process, and also to the Fortis Property Group for their commitment to work with the community.
- - - -
Here is Friday's press release:

“Local elected officials, Community Board 6, and the Cobble Hill Association are working together to involve the community in the future of the Long Island College Hospital (LICH) site.

Fortis Property Group, LLC was selected to purchase the LICH campus through an RFP process managed by the State University of New York, after it decided to close LICH. This process was staunchly opposed by elected officials and community organizations.

To date, Fortis has indicated that two options exist for the redevelopment of the core LICH site: (a) an “as-of-right” option, which does not require discretionary public approvals, which would include about 400 market-rate units, and (b) a rezoning or “ULURP” option, which would roughly double the number of residential units and include affordable housing units, space for a public school, increased park space and more small retail opportunities. A rezoning would require review by the Community Board, Borough President, and City Planning Commission, and approval by the City Council.

Both of the proposed options present development that is dramatically out-of-scale with the adjacent Cobble Hill Historic District, which has a height limit of 50 feet (in each case, the tallest building Fortis proposes would be over 40 stories). In either scenario, NYU Langone will also build an approximately 108,000 sq. ft. health center at the corner of Atlantic and Hicks.

We will continue to work together to ensure all of the community’s options are explored. This working group will help organize public dialogue about the options. It is not a decision-making body, and will not recommend that Fortis pursue a particular option. Rather it will organize forums where residents, businesses, and stakeholders (including the Brooklyn Heights Association and Atlantic Avenue BID, both of whom represent areas adjacent to the LICH site) can learn more about the various options, weigh in on Fortis’ potential development options, propose alternatives, and provide community feedback. All stakeholders (elected officials, the community board, community organizations, individuals, etc.) will ultimately make their own decisions about Fortis’ proposals.

Over the next 2-3 months, the working group will organize several open, public meetings where Fortis will present their proposals and consider feedback, as well as several smaller meetings with stakeholders to drill-down on specific issues including: urban design, parks/open space, retail/commercial, the health care facility, the potential public school, potential affordable housing, and traffic/parking/transit and other infrastructure concerns.

A public meeting will take place the evening of Thursday August 6 from 6:30 to 8:30 pm at the Brooklyn Montessori School at 185 Court Street, at Bergen Street, in Cobble Hill. The meeting will include a brief presentation of the options put forth by Fortis, followed by opportunities for community feedback and discussion. All are welcome to attend."