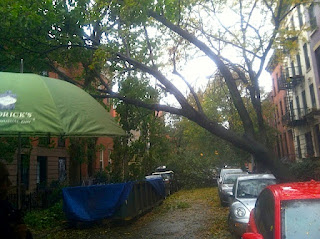 They have have found that seven trees were either uprooted or severely damaged beyond saving. Another seven trees were severely damaged, and their fate is still to be determined. Additionally, another eight trees were moderately damaged. It's clear that a substantial number of trees will need replacing. As it happened, they were already doing a Fall tree planting when the storms hit. Fortunately they were able to replace one of the trees that had been uprooted at 240-242 Baltic Street, and hope to replace several additional trees over the coming year.

We would appreciate hearing from CHA members if their local tree needs replacing or serious pruning. The Cobble Hill Tree Fund has some funds available to help with these costs and hopes to raise more.
Posted by Dave 'Paco' Abraham at 11/29/2012 08:00:00 AM