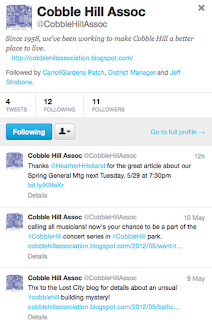 For months, the Cobble Hill Association has already been frequently posting news and updates to an existing Facebook Page for the neighborhood, but now jumped even farther into the realm of social media and begun a CHA Twitter account under the handle @CobbleHillAssoc. If you're on Twitter, be sure to follow us for loads more updates and info.

Also new for the Cobble Hill Association is our proposed slate for executive board officers to serve the 2012-2014 term.

Next Tuesday, May 29th, during our Spring General meeting the full membership will get to vote on this proposed slate, and then the evening will continue with awards being given to local historian Francis Morrone and dedicated preservationist Christabel Goug, followed by a discussion on the topic 'Can Cobble Hill avoid Manhattanization?'  All are invited to join!
Posted by Dave 'Paco' Abraham at 5/23/2012 10:09:00 AM

The meeting topic of non-Manhattanization is interesting. Will you be able to post a transcript of the prepared remarks?