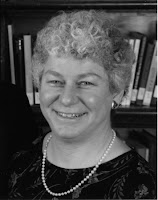 Our very own local activist Dorothy Siegel was recently featured with a full article in the Patch.com.


Siegel is a political activist... a preservationist and a community builder: as a concerned resident she has fought time and time again to help maintain the character of Cobble Hill and to build parks....


Siegel's big issue today is Brooklyn Bridge Park. She has been working for many years, with a host of other locals including Roy Sloane, President of the Cobble Hill Association, to fight against the city's plan to build private housing within the footprint of the park.
"We've been fighting for a real Brooklyn Bridge Park for years," she said. "We mounted a battle, and it looks now like the city is blinking."

To check out the full interview, check out the link below.
http://carrollgardens.patch.com/articles/headliners-longtime-resident-and-cobble-hill-activist-dorothy-siegel
Posted by Dave 'Paco' Abraham at 7/24/2011 03:07:00 PM